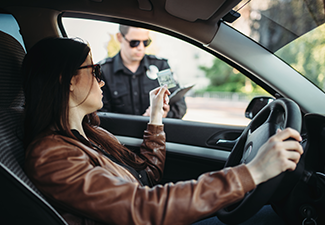 If you have been cited for a traffic violation, it can be difficult to know where to turn or what steps you need to take. It is important to understand the common traffic violations and the insurance penalties associated with them in New York.

Many drivers in New York have received a traffic ticket at least once in their lives. Most of them choose to pay the fine to get rid of the ticket. However, paying a traffic ticket may result in unintended consequences, including increased insurance rates.

A traffic violation can be defined as any form of unlawful activity a driver engages in while operating a motor vehicle.

Even if you were unaware that your actions constituted a violation, it is still possible that you may be charged with one of these offenses. If you do not take the necessary steps to fight against the traffic violation, you risk getting your license suspended or having your insurance rates increased.

The Point System in New York

The New York State Department of Motor Vehicles uses a specific point system that is meant to encourage safe driving habits and discourage motorists from committing traffic violations. Every time you commit a traffic violation, you receive points on your driving record. If you accumulate enough points over a specific time period, your license may be suspended.

The number of points that will be placed on your driving record depends on the type and severity of the violation. If you accumulate 11 points within an 18-month period, the DMV will suspend your license for a month, according to the DMV’s website. Let’s review how many points are assigned to some of the most common traffic violations in New York State:

In some cases, you do not necessarily need to accumulate 11 points for your driver’s license to get suspended in New York. The DMV may take away your license if you get three speeding tickets within 18 months.

If you are found guilty of violating New York State’s traffic laws, the penalties depend on the severity of the offense and whether this is your first conviction or not. The state may require that you pay fines and/or attend driver safety courses.

Additionally, your insurance company may raise your premium rates due to the violation’s point value, or even deny coverage. More serious offenses may lead to suspension or revocation of your driver’s license. Some insurance companies penalize drivers with traffic violations on their record less than others, which is why possible insurance penalties may vary from one insurer to another.

Regardless of the penalty imposed by the court system or your insurance company, contact a knowledgeable lawyer who understands traffic laws in New York State before making any decisions regarding how you should proceed.

How an Experienced Attorney Can Help

An experienced attorney can help by reviewing all available evidence related to your case. A lawyer can provide advice on how best to proceed given all relevant factors and assist in negotiating charges with prosecutors if necessary.

An attorney may also be able to reduce fines associated with certain violations as well as points assessed against your driver’s license for more serious offenses like reckless driving or driving under the influence (DUI). If you get a traffic ticket reduced or dismissed, you can avoid increased insurance rates. That is why hiring an experienced attorney to help you fight a traffic violation could help prevent insurance consequences.

Take the Next Steps to Prevent Insurance Consequences

The Law Office of Michael Kuzma understands the nuances of the law and court proceedings when it comes to fighting traffic tickets in New York State. If you have received a traffic ticket, time is of the essence. You may still be able to prevent or minimize insurance consequences by fighting the ticket. Reach out to my office in Buffalo, New York, to discuss your options for ticket reduction or dismissal.